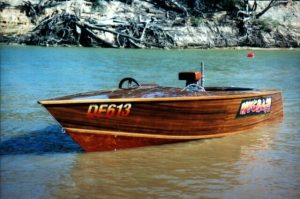 In the 80’s the Laub’s and Bertram’s would travel to Echuca each year to watch the ‘Southern 80’. After a few years of watching and pushing from Rob and Darren, the bug had bitten. – It was decided a Seacraft would be bought and a V6 Holden engine fitted.
After a trip to Jeff Tull’s, a 1990 M1R Seacraft was on its way. While the hull was under construction the engine was receiving a bit of Allan’s handiwork. As at the time, no other Holden V6 was in a boat, no maranising parts were available. Allan, being a fitter and turner, had to make everything necessary to marinise the engine plus fit out the hull, hence the three year build time.
One major problem incurred was the oil pump. In a Holden V6 the oil pump is located in the timing cover. The problem being that this is the end the prop shaft is on, so the oil pump had to be machined out, welded up and fitted with a thrust bearing. With the oil pump deleted the engine had to be fitted with an external oil pump, so it was dry sumped.
The rest of the engine is fitted with a steel crank, Carrilo rods, forged pistons, mechanical camshaft, roller rockers, ported heads, throttle body manifold, Motec computer and Porsche injectors.
By the time the boat was finished, Knotsure had finished his V6 conversion and was ski-racing very competitively for a couple of seasons. This gave the indication we should be competitive as well.
In the first ‘Southern 80’ everything was going perfect until we came to Merool corner. – Everyone knows Merool, but we didn’t, so we were flat out on the inside then realised it was tight, turned sharp and lost a skier. It took a long time to get back up with the engine popping and farting, but it was great for the small crowd laughing and giving us tips on what to do. This race finally did finish in about 1 1/4 hours.
Mygrain raced for 6 seasons and broke the Mildura class record twice. The team were close to the ‘Southern 80’ and Robinvale records a few times but unable to beat them. The boat was entered into 16 races, coming first 11 times and second once. – Seven firsts in a row.
The boat only ever had one D.N.F. The boat never broke down due to meticulous maintenance by Allan almost every night between races. The 1 D.N.F. happened after I bought the boat. I talked Allan into racing it for 1 more season. After winning the 1999 ‘Southern 80’, the Robinvale race was entered. This is where the problem started.

While on the first leg of the race Allan was driving in the middle of the river when the engine lost all power and vibrated very badly. At first it was thought the engine had blown up, but this was not the case because water was pouring in at a rapid rate. The boat had hit a tree stump and bent the prop and shaft like a cork screw. This caused the log bush to be ripped off the inside of the hull leaving a big hole. While in the centre of the river not knowing what to do, Allan tried to put his foot over the hole – this did not work to good. He then rememberd the beilge which coulg almost keep up with the flow. The team were paddling for the bank as fast as they could before it would sink. They eventually made it and had a long wait for the trailer.
Back in the caravan park the boat was given back to me and I was told it wasn’t required anymore.
The boat was sent back to Jeff’s and the bottom repaired. It has now been repainted and slowly being put back together. The engine has been re-ringed and bearinged and now hopefully ready for the social skiing future ahead.

ALL INFORMATION WAS BELIEVED TO BE TRUE AT THE TIME OF PRINTING.